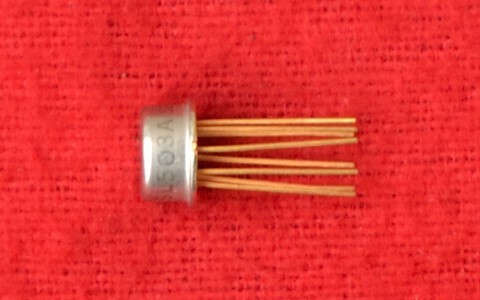 The SL500 series are bipolar integrated circuit wideband RF amplifiers, developed for use in linear radar I F strips operating at centre frequencies between 10 and 60 MHz.
AGC facilities and supply line decoupling are incorporated in the circuits. The mid-band current gain is typically 26dB.
The SL501 A and SL501 B differ only in current gain and cut-off frequency tolerance. Both are supplied without an output load resistor (free collector). Flatpack versions are SL551A and SL551B, respectively. The SL502A and SL502B are similar to the SL501A and SL501B but incorporate a 1k output load resistor. Flatpack versions are SL552A and SL552B, respectively.

The SL503A and SL503B are similar to the SL501A and SL501B except that the output current swing is typically 5mA.

APPLICATIONS
Linear IF strips up to 60 MHz.

The amplifiers are provided with two earth connections to avoid the introduction of common earth lead inductance between input and output circuits. The equipment designer should take care to avoid the subsequent introduction of such inductance.
The positive supply decoupling capacitor C1 has a series resistance of, typically, 10 ohms. The capacitor is a junction type having a low breakdown voltage and consequently the positive supply current increases rapidly
as the supply voltage exceeds 7.5V.
AGC should not be applied to stages required to give output swings in excess of ±0.2mA unless substantial distortion can be tolerated.
SL501 and SL503 devices must be provided with a DC path between pins 3 and 4 for the collector current of the
output stage. The DC resistance of this path should not exceed 1000 ohms for the SL501 and 400 ohms for the
SL503. The AC load may be connected between pins 3 and 4, or pins 3 and 1. 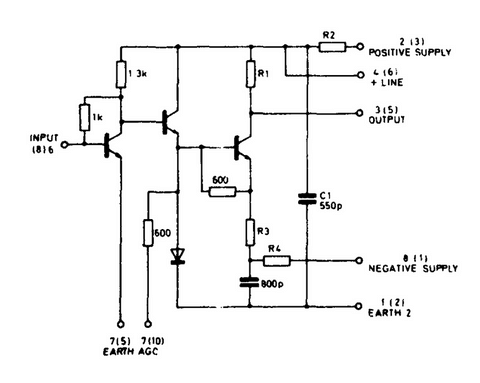